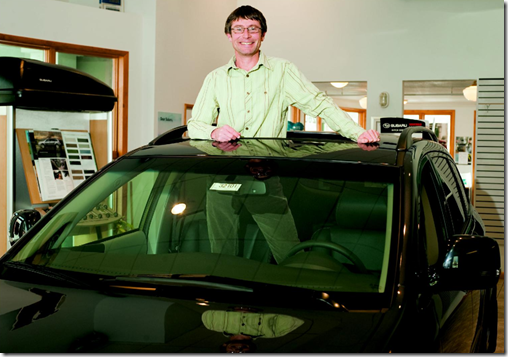 Damon Kowell, who manages Teton Motors’ pre-owned division, has car salesman in his blood. His grandfather sold the very first Ford Pinto in Pinto, Md.  Kowell says he “literally flipped a coin” to decide whether to join the Peace Corps or move to Jackson Hole. “The car business is fun, and I’m where I want to be,” he said. Kowell says work at Teton Motors is fun, gives him means to enjoy family, food, outdoors.

Damon Kowell’s first job, in first grade, was taking license plates off of cars at his dad’s automotive dealership. Almost 30 years later, Kowell, now 37, manages Teton Motors’ pre-owned division. He’s a car salesman because it’s fun, he says, and doing the job he knows by heart allows him the means to enjoy the forest, his family and good food.

Car salesmen are one of the least trusted professionals in the country, along with politicians, real estate salespeople and telemarketers, according to a 2010 survey by Maryland-based Sandler Training. “We’re cognizant of that,” Kowell said. “We do everything we possibly can to negate those perceptions about the car business.”

The Internet has changed the way used cars are priced and sold, Kowell said. Overpricing vehicles and haggling with customers are things of the past, at least at Teton Motors.

“We price them to sell and don’t have to negotiate,” Kowell said. “We’re forward-thinking with that. The only people who sell more cars than us are the big dealerships in Idaho Falls. That’s our velocity pricing. It’s how quickly you stock your shelves. We keep everything as fresh as we can.”

Kowell drives a used car himself, a 1997 Toyota Land Cruiser. He is a friendly guy. His demeanor puts people at ease. Salesmanship is in his blood.

“I come from a family of businesspeople,” he said. “We have the gift of gab.”

Kowell’s grandfather, Art, owned the Kowell Ford dealership in Cumberland, Md., until 1980. He sold the first Ford Pinto in 1971 to a Charles J. Pinto in Pinto, Md.

Born in Maryland to a fashion buyer mother and a car salesman father, Kowell moved with his parents and brother in 1980 to Albuquerque, N.M., where his father opened his own car dealership.

The skinny white boys from back East were picked on in the rough, primarily Hispanic city, so Kowell began taking karate. His master, a Korean man, worked as a head of special operations forces in the Vietnam War and after that headed security for the king of Laos.

“I was under his wing every single day,” Kowell said. He earned his first black belt at age 11 and competed nationally and internationally. For the past eight years, he has worked part time as an instructor.

“I liked the whole ethos behind it,” Kowell said. “The philosophy, history. Asian culture took a grip on me. Honor and respect were the two biggest things.”

Growing up, Kowell studied hard four days a week, because his father would pull him out of class one day a week to hunt, fish or ski. He still talks to his family on the phone every day.

Being close to outdoor recreation opportunities is the reason Kowell came to Jackson, but the small town’s low crime rate and laid-back attitude and the hedonistic bent of its residents is why he stayed.

“Everyone has a similar lifestyle,” Kowell said. “We’re not here to work crazy hours. People recognize we’re all here to enjoy life, to enjoy where we live. It’s the quality of life, not the quantity of money.”

After his job as lot boy in elementary school, Kowell ascended the ranks within his father’s dealership. He became a detailer, then was a grunt in the office, then sold cars and managed his father’s lots. He worked as a finance director at dealerships outside the family. After college, he took a traveling sabbatical. He attended graduate school in Spain, spent time in Croatia and snowboarded in Breckenridge, Colo.

When it came time for him to make another move, Kowell said, he was torn between the Peace Corps and Jackson Hole. He flipped a coin. You know the rest. He has been working at Teton Motors since 2001.

When he isn’t selling, fishing or hunting, Kowell is cooking. His parents cultivated his love of food, and traveling helped develop his palate. Meeting Anthony Bourdain after the saucy chef ’s first book came out helped steer Kowell’s cooking style: “The less ingredients the better. You don’t have to get too crazy. Simple is good.”

Kowell’s favorite cooking apparatus is his four-burner Weber grill, as big as his desk, with a smoker and rotisserie. He grills year-round, whether it’s Asian, Spanish, Mexican or wild game.

He cooks for three these days: himself, his wife, Trudy, and their 7-month-old daughter, Sage. Brown mixed-breed dog Bailey and Annie the dachshund complete the family.

Trudy was a nanny before having Sage, so she was experienced with babies and children, Kowell said, and becoming a father has been “pretty seamless.”

“I spend more time with my family now instead of every breathing moment hunting and fishing,”he said. “It’s a great split. She makes everything better.”

A fisherman since childhood, Kowell began hunting big game about six years ago. His buddies took him out on still, frosty mornings, and he fell in love with the experience.

“It’s a spiritual interaction with nature,” he said. “The connection with that fish or that animal, there’s nothing like it. It’s just peace. There’s nothing going through your mind.”

Back in the mountains, hiking in pursuit of a goal clears away any workaday details that clutter the mind, he said. “It’s like a principle of Buddhism,” Kowell said. “When you have nothing, that’s when you have everything. That’s why I like it so much.”

Hi there! great stuff here, I'm glad that I drop by your page and found this very interesting. Thanks for posting. Hoping to read something like this in the future! Keep it up! Pre-owned cars are practical alternative to buying new.
But be sure to deal to a certified dealers in your area.

What a great article and great message; When you have nothing,that's when you have everything.... well said.